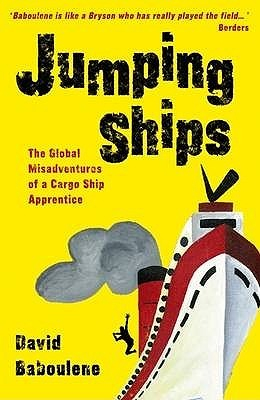 I've been reading Jumping Ships: The Global Misadventures of a Cargo Ship Apprentice by David Baboulene. The blurb describes him as "like a Bryson who has really played the field". However, Bill Bryson strikes me as cautious. I can't imagine him going for a run around an animals' watering-hole during the African sunset, "bereft of the basics for supporting life, and closer to nature, red in tooth and claw, than humans can advisably get". Closer, that is, to a nature where:

It wasn't just lions and leopards one had to fear in this part of the world. There were insects that could kill you! Plants that could maim! Spiders, snakes, crocodiles! Who knows what might drop out of a tree?! Even the dogs would tear you limb from limb — none of that 'nice-doggy-fetch-the-stickie-have-a-bonio' stuff around here. Just Death. This was nature with the roof off.

That was one misadventure Baboulene had, during a stop-over in Kenya while waiting for his ship to arrive. Another, which happened to him later while ashore in South Africa, was having to dress up as a nurse in order to escape from a nursing home. Which brings me to my title subject. Baboulene writes:

Now, I do not wish to make any statements here which could prejudice judgement or lead to awkward questions at some future date. We were all young once, and these things happen, but I have to admit that there was something — I don't know — intriguing about wearing Chevvy's clothes. I mean, I don't want to make a habit of it or anything, you understand, but it was a new experience in life's rich tapestry and it felt… soft. It was different from the sullen day-to-day boredom of men's jeans and T-shirts. There is a sensual side to women's clothes which we chaps are denied in our own wardrobes.

"… soft". I find it rather sad that Baboulene waited so long to experience this. The trousers I wrote about in my last post were very soft: as I said there, they're probably the most comfortable pair I've worn. Sensuality in both colour and texture is something the Moroccans seem extremely good at. And they don't restrict it to women.