The title of my last post, "The Sullen Boredom of Jeans", made me think that this is a good time to mention a blog called Saaibestriijding by Dutch artist Paul Tieman. In Dutch, saai means "boring" or "dull", and bestrijding is "struggle". And like mine in Chromophilia, Paul's struggle against boredom concerns clothes. His blog's sidebar starts:

Some first steps toward the re-introduction of colourful and creative men's clothing, after two centuries dominated by black, grey, boring mass clothing. That is what Saaibestrijding is about.

As Paul says in Tópicos 2e1: Paul Tieman", a post for the São Paulo artists' collective "Dois e Um", men's clothing today is limited almost entirely to T-shirts, jeans, and suits, not to mention dull colors and patterns. But he dived into history, and found to his surprise that previous centuries were much more colourful. 13th-century European men, for example, wore two-tone trousers and brilliant colours. So Paul introduced colour and creativity into his own clothes.

The results can be seen in Paul's blog posts, which feature clothes that he has designed, bought, or commissioned. Here are two examples, from posts Acht-en-vijftig and Negen-en-vijftig 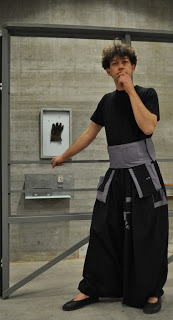 To some people, these may look like exact copies of clothes from the past. But they're not. As Paul says in post Vijf-en-Seventig:

Just an ordinary day in my working studio in Maastricht (the Netherlands). Often people are commenting like: it's just renaissance clothing what you are wearing. But it is definitely not. It is all contemporary design, only slightly inspired by the past. For example, in medieval or renaissance times, men did not wear black. And, another example, jeans were inspired by rough cloths worn by some american men in the 19th century, but evolved after their re-introduction into timeless basics. Saaibestrijding would like to widen the range of timeless basic clothing for men by showing the great opportunities of leaving the dictatorship of the present dullness behind.