If you look at Paul Tieman's Saaibestrijding blog, which I wrote about in my last post, you'll see that many of the photos show him wearing a skirt. There's no reason other than convention, of course, why he shouldn't. In others, he's wearing an equally comfortable but less familiar item of clothing, a sarouel. What does this word mean?

There's an Arabic word "سِرْوَال" or "sirwal", cognate with "salwar" as in Indian salwar kameez. It has been taken into French as "sarouel", and occasionally gets used in English. In French, it seems to denote any kind of low-crotch trouser including qandrissi, or at least I get that impression from shops and other sites. In English, the nearest equivalent is probably "harem pants". 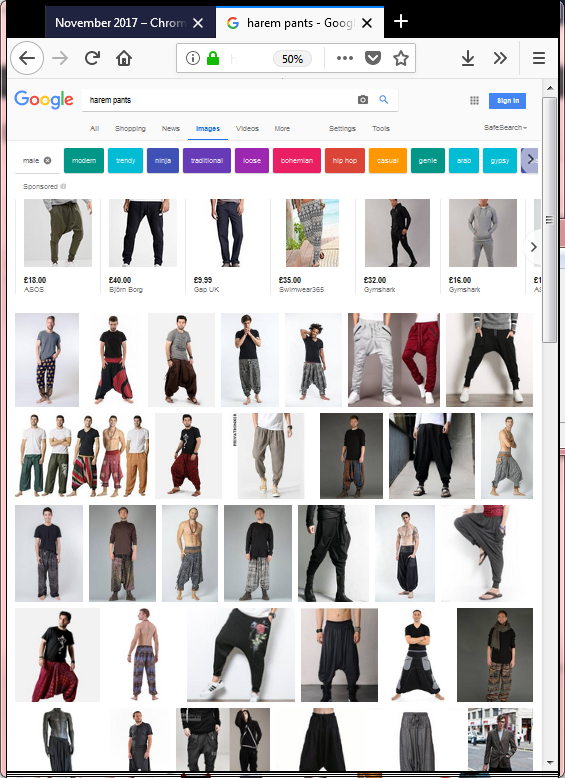 Of course, the French have more contact with North Africa than we do, there being probably so few qandrissi wearers in England that this question of semantic boundaries has never arisen. I, anyway, tend to talk about sarouels rather than harem pants. And so, when writing English, does Paul.

I have bought one or two non-Moroccan sarouels, to try different styles. I wanted the same things from them as from the Moroccan ones, namely comfort and smartness. And I like the long flowing lines in the very low-crotch versions. When taken to the extreme, their crotch becomes just the bottom edge of the trouser, with two holes for the legs. If this is at the ankles, then the trousers are better for cold weather than the typically ¾-length qandrissi.

But a disadvantage is that most of the trousers are "hippie" styles from India, Nepal, or Tibet. They tend to lack flies and belt loops (using drawstrings or elasticated waistbands instead), and to have insubstantial shallow pockets. I have had pairs also where the dye wasn't fast. In one pair from fantazia.fr , it was so un-fast that when I got soaked in a sudden June downpour, the dye ran onto my jacket.

The photos below show a pair I bought online from "Mr Tipoi", www.mrtipoi.com (now expired, sadly), because I liked their long vertical lines and flared shape. They're from her online catalogue, and are the very same ones that I bought.