Let's go back to the velvet waistcoat I showed on Monday in Oakland Velvet Fruit and Flower: 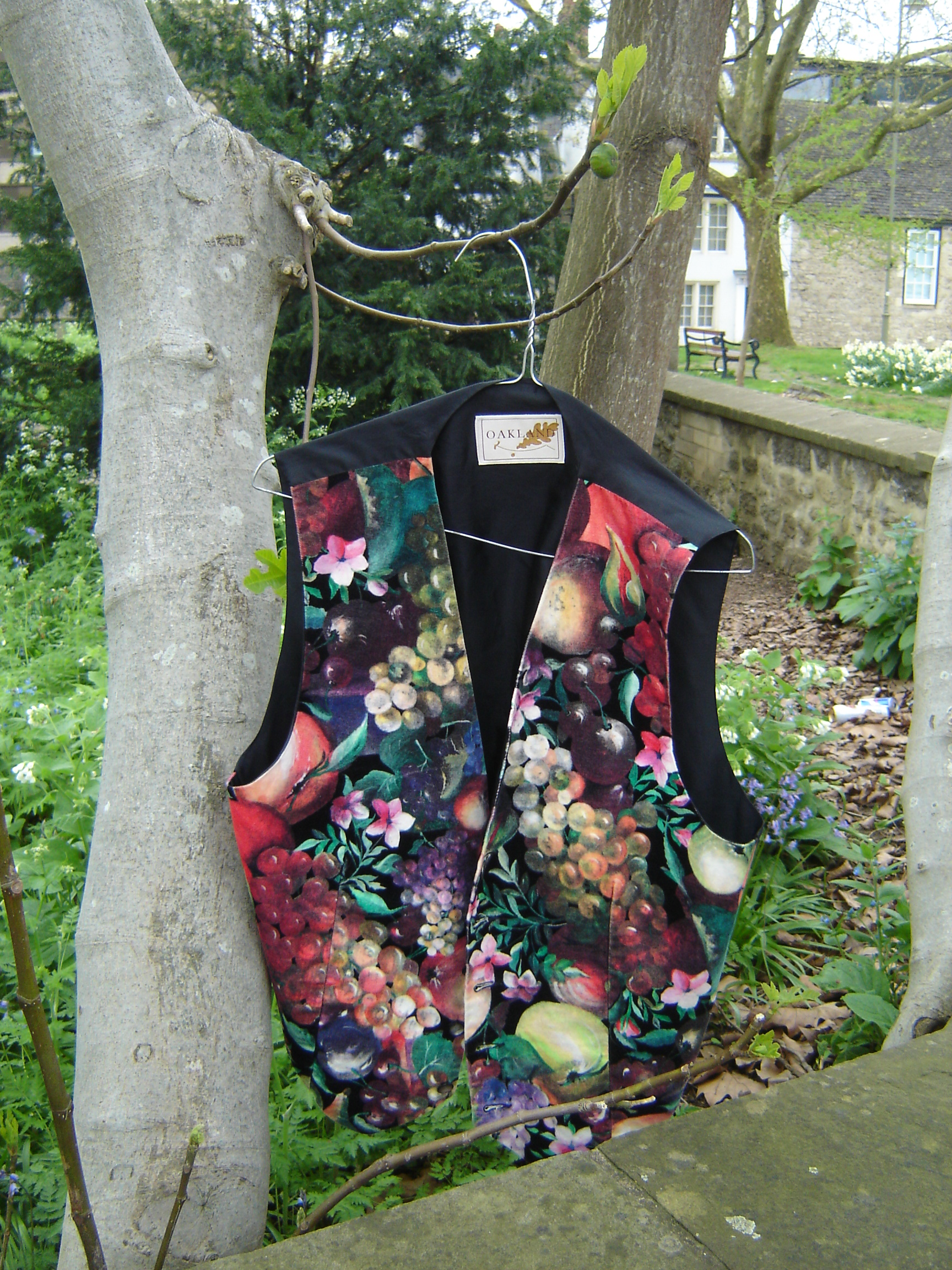 Its colours are implemented by printing: 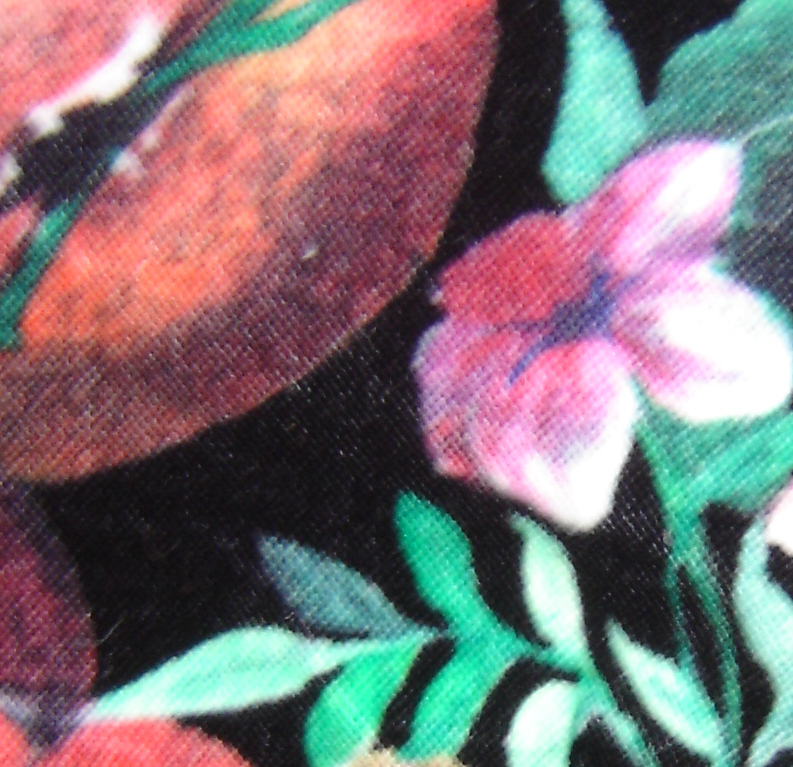 But velvet can be intricate, with patterns made by weaving rather than by printing. Here are two samples from Velvets by Chiara Buss, published by Collezione Antonio Ratti. Text in quotes is Buss's. 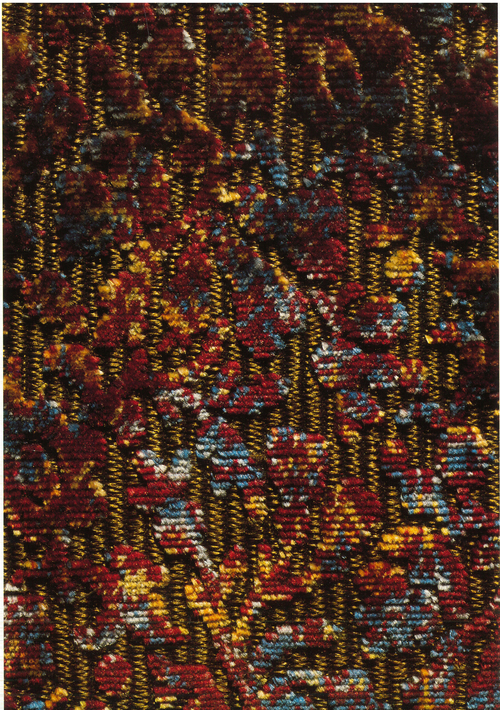 The highly stylized floral design is achieved in a profusion of brilliant colours in contrast with the dim, dull colour of the ground." 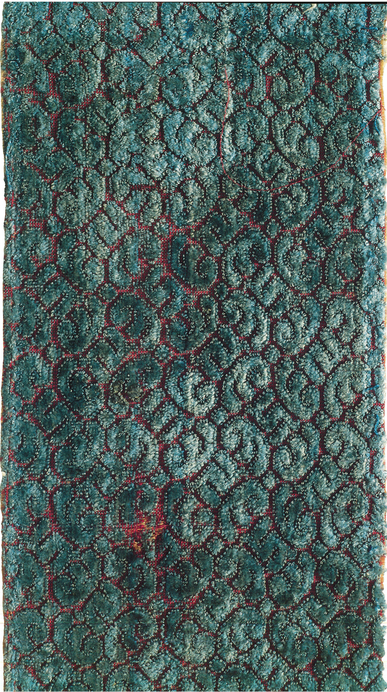 Tiny 'E'-shaped, 'S'-shaped motifs and dots are arranged with binary alternation along diagonal bands, with an up/down and right/left alternated orientation. Pattern in cut pile with borders in uncut pile on a bare ground."

Both of these are in the men's fashion section of the book. The first, 1895-1906, is for a man's waistcoat. Buss remarks that "it was only in the tie and waistcoat that [men] could combine colour, silk and pattern, and only in the waistcoat could they wear the most precious of all silk fabrics, namely velvet."

And here is one yet earlier. This is a detail from Anton Van Dyck's "Portrait of the Marchioness Brignole-Sale with her Eldest Son", showing the son in a velvet suit. Next to it, Buss displays a sample of red figured velvet on an ivory-coloured ground, from Genoa around 1620-1630. She notes that we can conclude that it was made there because it's so similar to the velvet in the portrait, the son being a member of one of the most powerful families in Genoa.

As I don't want to go beyond copyright fair use, I've kept the images small, and only shown those two samples. The book has many others. They show what could be done with the technology of the times, some of it even before the automation of the Jacquard loom.

So with our technology, why can't we do better? As "Dismuke" says in Objectivism Online Forum's thread "Why are men's clothing so boring?":

The reason I think is because style, glamor and grandeur in fashion, like virtually every other aspect of our popular culture, collapsed into a nihilistic sewer during the 1960s and 1970s and has only partially recovered in the decades since.

Look at old photos from the 1930s. Both men and women dressed very attractively as a rule — and this included ordinary people who were less than affluent and at a time when the country was in the middle of a very severe economic depression and when clothing was much more expensive (after adjusting for factors such as inflation) than it is today.

There is no rational excuse for the population of today to be less nicely dressed than that of our grandparents — clothes cost a lot more less to make, technology has given us a wider variety of fabrics to choose from and we have had several decades that could have been used for aesthetic innovations had the culture been open to such innovation.