I've been pondering questions. Why do Brexiteers sound dashing, whereas Remainers sound like Remoaners? Did you know Theresa May has three ears? A left ear, a right ear, and a rabid Brexiteer. And did you hear the new idiom coined to signify minuscule in influence or effect: "as meaningless as a Remainer's vote".

If I sound bitter, it's because I'm going to lose my European citizenship and my right to move freely through 27 countries. Guy Verhofstadt, Brexit coordinator for the European Parliament, has suggested giving EU citizenship to those Brits who want it post-Brexit, but nothing has yet happened. My previous experiences of visa-based travel involve trogging up to the Romanian embassy in Berlin's Dorotheenstraße, after expending some effort to fit in with its peculiar opening hours; and, later on the same trip, being woken by a border official at 3am as my sleeper car crossed the Danube from Romania to Bulgaria. "Come, Mr Englishman", murmured the guard as he beckoned me from the train, onto a platform at Ruse station, and into the customs room. I'm not thrilled at the prospect of such things returning.

In the 17th and 18th centuries, wealthy young men were wont to take the Grand Tour. They'd meander around Europe, acquainting themselves with the Renaissance and Europe's classical heritage. I suggest we hold a one-off equivalent; the Brexit Farewell Tour. Everyone will be encouraged to spend as much of a year as they can visiting, or revisiting, those countries that will henceforth no longer be accessible without visa-based inconvenience.

It's almost Christmas, so I'd begin with Germany. Probably M&uumlnster, because I know the city well, the cathedral with its green copper roof is sublime against the snow, and M&uumlnster does Christmas markets as well as anywhere in Germany. I'd order what I think was called "drin, draus": a small glass of Glühwein with two joined sausages balanced on the edge of the glass, one dipping into the wine, and one thereout. But so that I can stand at the stall and drink in comfort, first I'd follow the advice of a friend. When I arrived in M&uumlnster in winter one year, he said, "Right. The first thing you do is to go to the nearest department store and buy yourself a pair of lange Unterhosen." These are German long johns. The best are made by Schiesser, a company known to every German, and I do recommend them. They're very warm, and they last.

The Schiesser lange Unterhosen I bought lasted for over 10 years, and did me very good service against UK winters. Here, you can survive without them. But in Germany, such protection really is needed. I once walked across the Aasee, the lake in the middle of M&uumlnster, on a — for there — perfectly normal November day. It was -12°C, and the air felt like flame in my stomach. Against such extremes, another item of clothing is useful, and that's the Unterziehrolli: a polo neck that you wear under your shirt. There are thermal skiing versions which I've worn when walking in Bavaria, and these are great against the mountain air.

But enough of the cold. After Germany, I'd make tracks for Greece. In Athens in January, you sometimes get the "halcyon" days when the temperature can rise to 20°C. This happens, according to one myth, because it's then that the kingfisher — the halcyon — builds her nest on the sea, and her father, Aeolus god of the winds, calms the winds to protect the young. For such warmth, the baggy trousers shown below — vráka or βράκα, plural vrákes or βράκες — look ideal. The two pictures below show versions from Skyros and Crete. 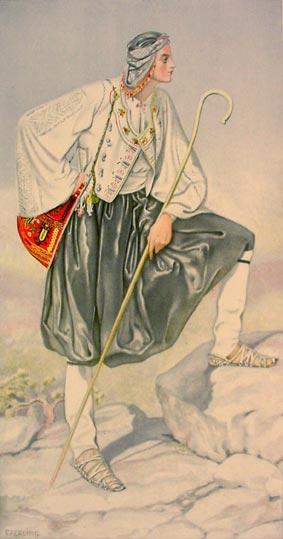 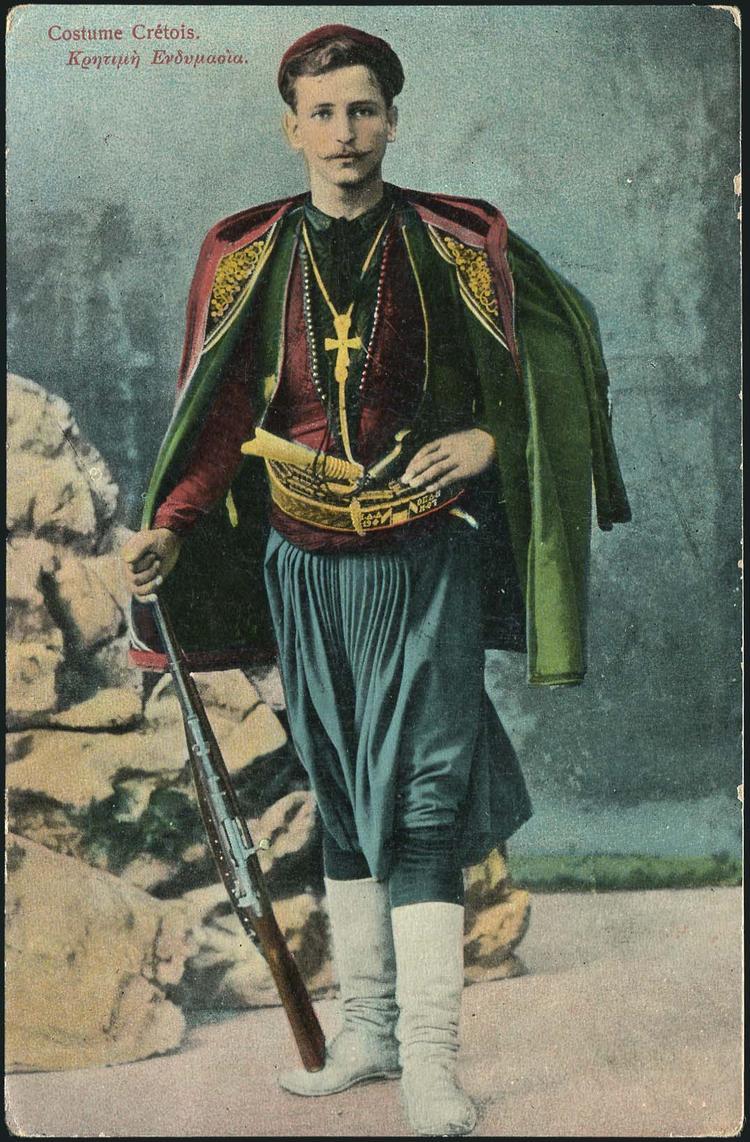 I never saw vráka while living in Athens, but I often saw another pleated garment, the fustanella or φουστανέλλα worn by the Presidential Guards in Syntagma Square.

[ Image: via Wikipedia, by Stanislav Amelchyts ]

Wikipedia on the fustanella cites the paper "Akritan Ikonography on Byzantine Pottery" by J. A. Notopoulos, which says that the fustanella evolved from the Roman toga, and that in cold climates, pleats were added for extra warmth. I was puzzled about how this works, but it makes perfect sense when you look at the diagrams in "'Military' Box Pleats" in the blog Matthew A. C. Newsome Kiltmaker. These show how, as you add cloth, the shape of the pleats changes, resulting in more overlap up to an effective four or five layers per pleat. It makes me think that none of the pleated Moroccan trousers I own were designed for British winters, and I should commission a kiltmaker to make a pair that are. In Scotland, because it's the only country I'll be able to visit without a visa. Until the next independence referendum, that is, when Scotland rejoins the EU.

On the way from Germany to Greece, I'd pass through Italy. If M&uumlnster cathedral is sublime, so is the train journey down through the Alps via Rosenheim, Kufstein, Innsbruck, Brenner, and the towns of the Italian Tyrol. Watching shoppers getting on and off the train as it stops at the stations: weekly routine to them, a thrice-in-a-decade occurrence to me. Looking down at the onion-dome churches in little villages far below the railway track. And sitting in the dining car as the train speeds past the Adige south of Trento, the river foaming past near the rails, pine forests and bare peaks in the background.

Italian tailoring is legendary, and I have a fine specimen of it myself, this Falabella velvet jacket. But Italian clothes still share the same body plan, shall I call it, as English ones, so I don't find them as interesting as the more exotic styles I've blogged on this site. But there is one splendid exception. Strictly speaking, it's not in Italy, but I'm still going to show it. It's the Pontifical Swiss Guard of Vatican City: 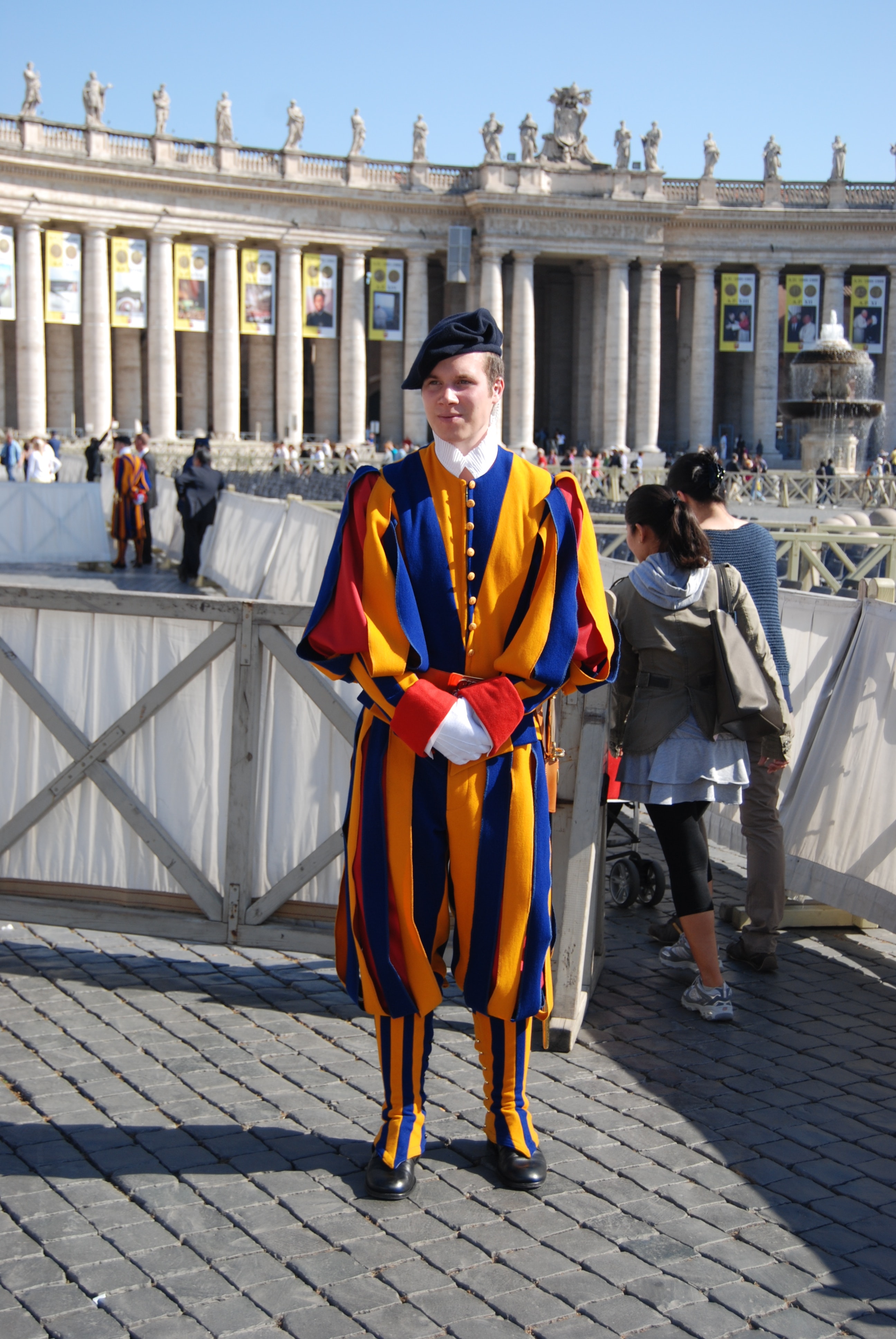 [ Image: by Mircea Iancu, via Pexels ]

Now to Portugal. If Athens has the halcyon days, the Algarve has folksongs about the almond blossom coming out in January. So that's another place I'd go for warmth. But for tailoring, I might need to go further north. There's a saying: "Braga reza, o Porto trabalha, Coimbra estuda e Lisboa diverte-se". Braga prays, Oporto works, Coimbra studies, and Lisbon plays. The tailoring I've seen would bear out the part about Oporto working. When I was last employed in Portugal, the city was full of little independent clothes shops, selling excellently cut clothes made from local fabrics. One shop owner told me that Portugal has excellent textiles, but that they were little known outside Portugal, because the companies didn't do enough marketing.

There was a great deal of black. The Portuguese have this word "saudades" that they claim no-one else truly understands: a national melancholy, perhaps for the loss of an empire. (That's better than Tory party nostalgia, which manifests itself in unrealistic longings for Empire 2.0 while playing silly buggers with the EU.) Saudades shows itself in much use of minor keys in music; and in the colours of everyday dress. Traditional costumes, however, are more colourful. Search for "trajes tradicionais Portugueses" and "trajes folkloricos Portugueses". The minstrel and academic costumes, "trajes de tunas Portugueses", are also worth seeing.

But that's quite enough of Europe. I hear Theresa May yell. "If you believe you are a citizen of the world, you are a citizen of nowhere. You don't understand what citizenship means." I've seen at first hand the national costumes of four countries, bought clothes in six, and had haircuts in three. I know where to buy the best bread in Athens, and the best beer in Brussels; how to order doces de ovos in Coimbra, speculaas in Maastricht, torte in Münster, and churros in Salamanca. If I'm not now as fat as a house, it's because I've also walked and run: amidst the piney aromas of Strefi hill in Athens; 20 km from Eindhoven to the Achelse Kluis monastery on the Belgian border, returning with a rucsack full of Trappist beers; meandering amongst the National Rebirth architecture of Plovdiv; exploring Sintra, of which a Spanish proverb says, "to see the world and leave out Sintra is to go blind about."

I've made phone calls in five languages, written emails in four, and listened to lyrics in eight. There's a lovely melancholic song "De Fanfare van Honger en Dorst" — "The Fanfare of Hunger and Thirst" — written by Lieven Tavernier and sung by Gerard van Maasakkers that I found out about by reading a music review in a discarded paper in a café in Maastricht. It still makes me want to cry. So, in a different way, do tracks from the Galician group Luar na Lubre's Plenilunio. I once walked back at night in Sintra singing pre-revolutionary songs by Vitorino with a musician from the Grupo de Ação Cultural, a group that fought against the dictator Salazar. I don't know whether she ever heard Manos Loïzos singing "Ο Δρόμος" and "Τρίτος Παγκόσμιος", but I've heard those too, and they would have fitted right in. With a few languages and some persistence, the EU provides such treasures for the taking. Has Theresa May ever opened herself to such opportunities? I think not. So here, from Redbubble, is my final item of clothing. 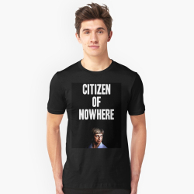