Other writers present included Brian Aldiss, John Brosnan, Chris Evans, Harry Harrison, Rob Holdstock, Roz Kaveney, Christopher Priest and Andrew Stephenson — all of whom invariably gravitated to a pub and swapped fond anecdotes about Richard. One that he used to tell himself concerned his first day at Oxford, when after lengthily gathering courage he stepped out of his college room to be confronted by an exquisite fop in a velvet suit, cape, and broad-brimmed aesthete's hat, who sneered and passed by. Deeply conscious of his jeans and t-shirt, Richard retreated to his room and (he claimed) stayed there for three days. The other chap proved to be Martin Amis.

This excerpt, from David Langford's news-and-gossip column "Ansible Link", refers to the funeral of Richard Evans, senior science-fiction editor at Gollancz. "Fop" has pejorative overtones; and since Langford is an author, critic, and editor, words are his business. If "fop" was his choice of word, he intended these overtones. But why?

It rains almost every day in Britain, so broad-brimmed hats are very practical. More so than umbrellas, which I loathe. They poke into eyes, monopolise a hand, and leave themselves behind on buses. Hats do none of these.

Practical too are capes. Superheroes revere them because they excite the brain region which recognises raptors. But I enjoy their convenience. I have a long navy-blue cape labelled Selfridges Schoolwear, bought for £10 at the local market. It must be at least 40 years old, and we think it was intended for a teenager at a posh public school. It's made of felted wool, goes over anything, and I wore it a lot while the Beast From The East was raging. Covering the arms completely, it's warmer than a coat, and experience showed that it's great at keeping off snow.

Some capes are beautiful. The one below is Turkish. It's gathered at the shoulders, and falls in a way which smooths out one's bumps and hollows much as does a jacket. In his student days, Evans would have smoothed out the bumps and hollows in his walls by covering them with posters (probably of the Athena Tennis Girl); why object to Martin Amis doing likewise for his body? Wearing jeans, on the other hand, makes your legs more lumpy, and often stumpy and dumpy too. 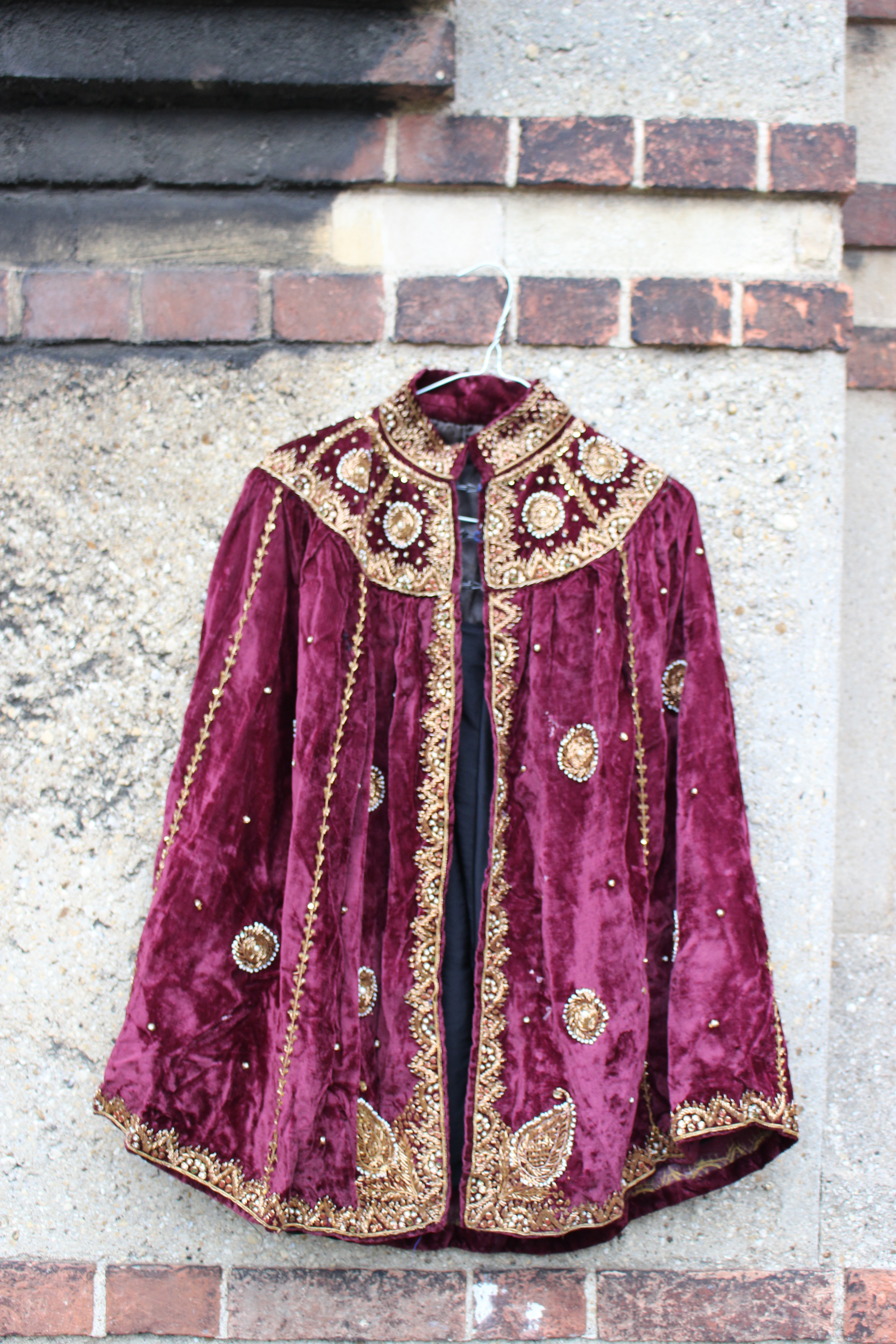 I enjoy the feel and the light-effects of velvet, so I own other velvet clothes. And these include a velvet suit by RiteRhode: maroon with flared trousers. I've also got a jacket-and-harem-pants suit in silver silk velvet, made for me in Morocco. Henry Cavendish is said to have favoured a velvet suit, and if that's good enough for the man who explained latent heat, measured the density of the Earth, and isolated hydrogen and argon, it's good enough for me. Since he also researched the spectrum, he probably enjoyed velvet's sheen and shimmer.

Indeed, you needn't search far to find websites advertising velvet cushions under brand names such as "Champagne", "Luxury", and "Opulence". But did anybody ever dare sell a cushion in denim? There's a cat poem one of whose verses runs:

For from that day I ceased to be
The master of my destiny,
While she, with purr and velvet paw
Became within my house the law.

Not, please note, "and denim paw".

The standards applied to clothes are very different from those applied to similar materials and decorations in domains such as interior design. That is strange, and a shame.