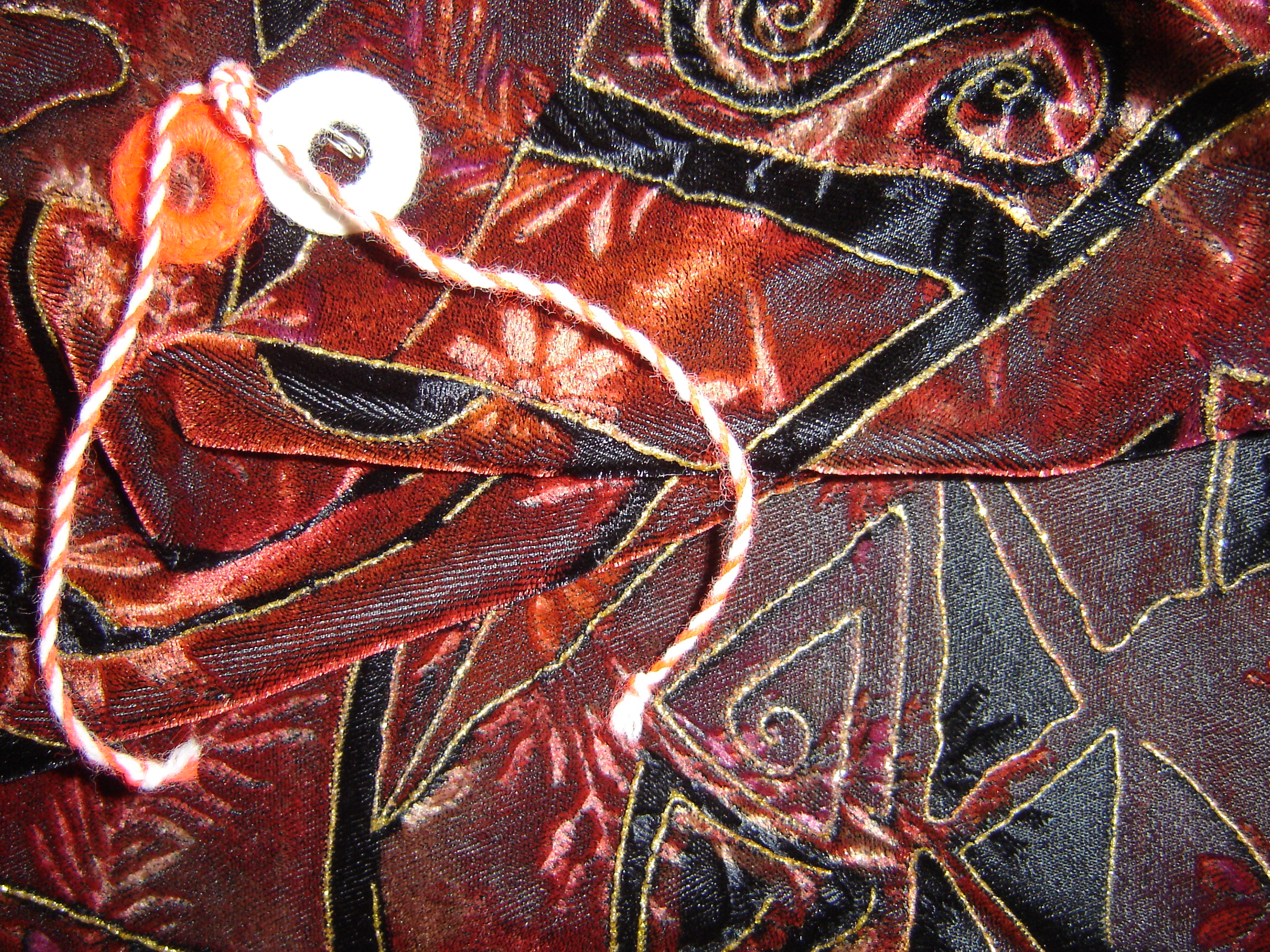 I trust academic websites more than some others. More than tourist sites, pushing souvenirs at the expense of truth. So when I wanted to find someone describing how they wear the decoration above — a martenitsa — I searched .ac.uk . The blog post "What's New!" by Veneta Haralampieva at Manchester University was the first thing I found:

Finally, I would like to wish you all "Chestita Baba Marta!". In the beginning of March in my home country we celebrate Baba Marta or Granny March — a mythical woman who brings with her the spring and marks the end of the cold winter. Her holiday is celebrated by exchanging martenitsi — a small piece of adornment made by interweaving red and white yarn. It is also given as a token of good health and one usually wears martenitsi until the end of March or until a stork or a budding tree is seen. So lets welcome the spring and "Chestita Baba Marta!" everyone!

I blogged about martenitsi last March, and now it's March again. My photo shows a martenitsa given to me at a Bulgarian party, pinned to this cropped velvet jacket: 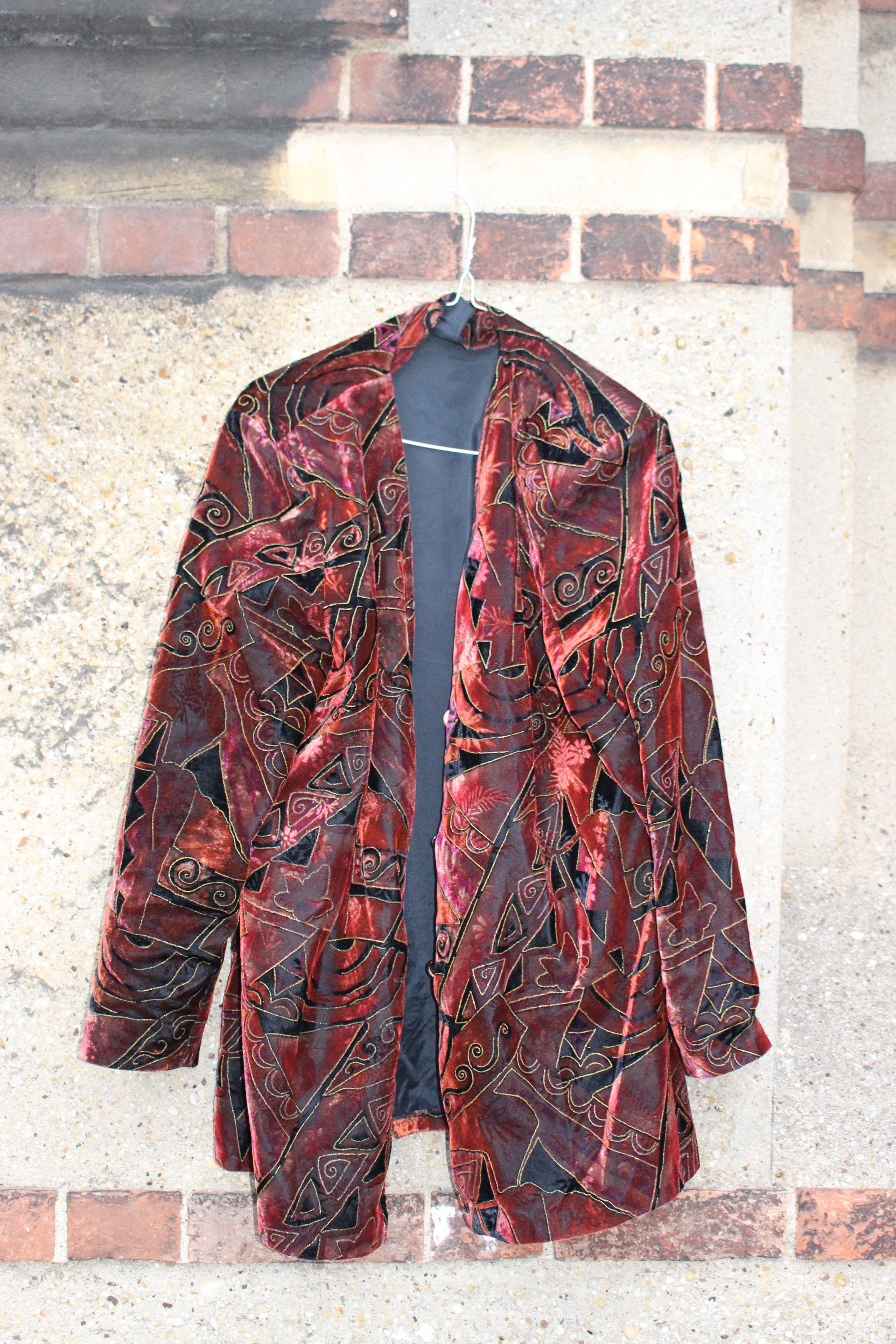 Were I in Bulgaria, I would probably forfeit it once I'd seen a stork or budding tree, perhaps tying it to the tree or putting it under a stone. But I don't have a replacement, so I'm going to keep it. The stork and buds, explains Wikipedia, are evidence of spring, indicating that Baba Marta is in a good mood and is about to retire. Her mood is crucial: the web page "Grandmother March, Baba Marta, 1st March, Martenica" from the Regional Historical Museum in Burgas adds that Baba Marta is moody and easy to anger. So on the first of March, old women stay at home, because Baba Marta wants to see only girls and young brides; and those people who do go out welcome her with red.

There are big martenitsi as well as small. Here's a photo of one on the clock tower in the Bulgarian town of Botevgrad: Martenitsi are sometimes made in the form of dolls, the characters Pizho and Penda (Пижо и Пенда).

[ Photo: via Wikimedia, by Elena Chochkova ]

In Radio Bulgaria's "Pizho and Penda: the folklore symbolism of the martenitsa", Vihra Baeva, a folklorist at the Bulgarian Academy of Sciences Institute for Ethnology and Folklore Studies says that the white and red symbolise masculine and feminine, passive and active, purity and the force of life. Bulgarians also use these colours in weddings: the bride wears a white apron and a red sash, and the groom, a red waist-band and a white kerchief in his hand. In this sense, says Baeva, the couple are like a martenitsa come to life; and vice versa, Pizho and Penda being seen as newly weds.

There are lots of Pizhovchi and Pendi in a sweet little photo gallery halfway down the Burgas museum page. In the second row, there's a sampler with the words "Честита Баба Марта" — "Happy Baba Marta". I had to peer closely before deciding that the squiggles on the top left were a word rather than decorative embroidery; but in handwritten Bulgarian, the first word resembles Честита, so the wiggles are just its middle letters in somewhat wobbly stitching. In the fifth row there's a card with the same words in capitals. Probably a a school project, because there's the name of a school ОУ „Найден Геров” underneath.

Bulgaria isn't the only country with martenitsi. A web page from the European Parliament, "Martenitsa — a symbol of spring, health, peace and fertility", says the tradition also exists in Romania (Mărțișor), Greece (μάρτης), Macedonia (мартинка), Albania, and Moldova. The page is by the EU Terminology Coordination Unit, who help make documentation and terminology consistent across languages. I love the idea of standardising the terminology for the martenitsa and its counterparts. An organisation that does this can't be all bad; but no doubt Theresa May would disagree. A citizen of everywhere is a citizen of nowhere, and as a true Briton, I should be concerned only with British spring rituals. Though in Oxford, I think we only have May Morning, Ascension Day, and assorted Morris Dancing.

Where did the tradition come from? The Alexander Fol Centre for Thracian Studies have a page on the topic Translate. This discusses the origins and symbolism, saying that the tradition is not purely Bulgarian, but originated in ancient Thrace and Greece. Which is contrary to the title of Radio Bulgaria's feature "Martenitsa, the uniquely Bulgarian symbol", but that's national pride on the web for you. In modern Greece, says XpatAthens's "Martis — A Greek Tradition To Welcome Spring", the martis is considered to help protect the wearer's skin from the coming months of strong Greek sunshine. If only.

"The Nomination for the ICH element 'Martenitsa' is inscribed in the Representative List of the Intangible Cultural Heritage of Humanity of UNESCO", UNESCO, 6th December 2017 Wayback

"Cultural practices associated to the 1st of March: Bulgaria, North Macedonia, Republic of Moldova and Romania. Inscribed in 2017 (12.COM) on the Representative List of the Intangible Cultural Heritage of Humanity", UNESCO Wayback