The little black dress is the solution. But what's the problem?
Monday 1st October, 2018
Attitudes

Salman Rushdie's wonderful children's book Haroun and the Sea of Stories is based on the premise that there is some evil mechanism that is taking away the vital stream of stories that course through the veins of our world. My paper is based on a kind of adult equivalent to this story. During my lifetime I have been witness to a similar dreadful loss and in this paper I want to don the mantle of the anthropologist as detective and see if I can locate the culprit. The crime is evident all around us. There has been a gradual leaching out of colour and print from the world of Western women's clothing.

So begins a web page titled "The little black dress is the solution. But whatâ€™s the problem?" by University of London anthropologist Daniel Miller. It describes how he came to write a paper of the same name† about why people today dress so drearily.

Miller says that as a child, he worked in a Carnaby-Street-style boutique and was "enthralled by the coral sea of clothing, while festooned in my own purple flared trousers, beads and floral shirt". When he started lecturing as an anthropologist, he was still wearing a bright orange jersey and a necklace of shells retained from his fieldwork in the Solomon Islands. But even then, this was making him look anachronistically hippy-ish, so he gradually drabbed down, adopting "the general conventions of male clothing based around indigo and black, which is constructed along a vague polarity with `classic' Armani emulating cuts for more formal wear, and jeans materials for the more informal to today's customary indigos and blacks".

Now, indigo can be a blazing, dazzling, glaring colour, as in this indigo coat of mine: 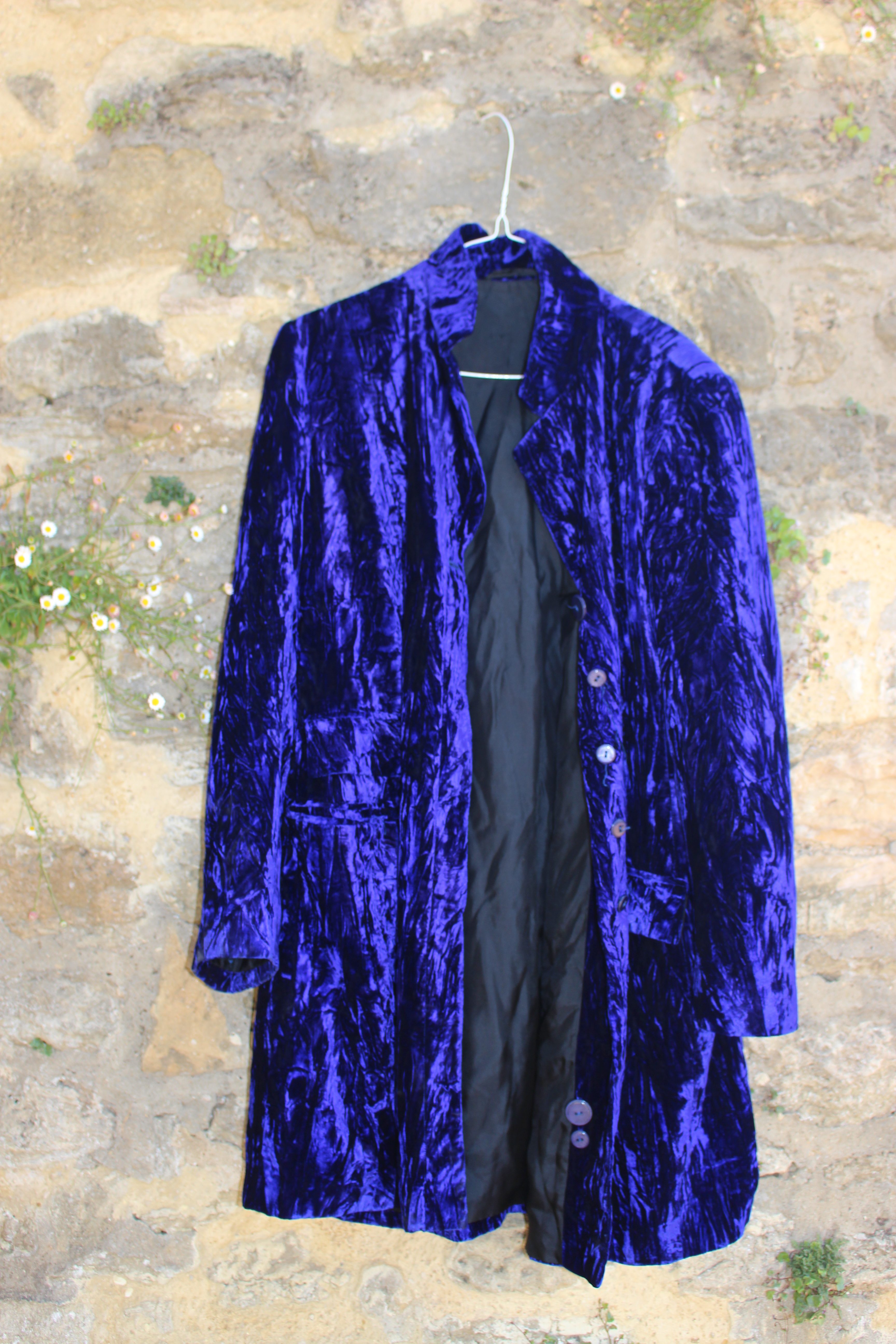 I suspect, however, that Miller doesn't mean he's wearing this kind of indigo, but the sort that gives jeans their colour — or lack thereof. As he says, "About the most existing possibility left to me is to discover a new shade of grey."

But while resigned to the dreariness of day-to-day wear, Miller did still expect to see more adventurous clothing on holiday, a 'Hawaiian shirt' lifting of the gloom:

Well for a while this seemed true, but then I was starting to find that my fellow tourists were bringing out the same dull drab clothes on holiday that they were wearing at home — just more interesting messages on the T shirts. But at least I felt that if holiday clothes had also become drab, the last refuge of colour would indeed be the beach and the swimsuit, with at least some desire to 'fit in' when snorkeling over a coral reef. So the decision to write this paper can be precisely timed. It came when taking a family holiday on a beach in Mexico. I had my novel and my drink and was relaxing under a beach umbrella. This was quite a European resort and the people around me were probably Dutch, Swedish and English with a few Americans. Anyway, after a while, I started looking around me and what actually caught my eye was that every single bikini or swimsuit as far as my eye could see was — you guessed it — black. At that point I decided that surely if the anthropologist could turn detective, I might not be able to stem this tide, but might at least find the culprit."

So what was the culprit. Very disappointingly, Miller doesn't have his paper on open access. There's a database entry for it linked from the 2004 section of http://discovery.ucl.ac.uk/view/people/DMSMI78.date.html. But even though this service is called open access, it says the full text is not available. However, he does summarise it in his web page. He starts by discussing four possible causes. These are: