Moving back up the map from Greece to very northern Europe, here's a high-waisted sarouel from Paul Tieman, an artist from Maastricht now living in France. I've mentioned him before; in the preamble to his blog Saaibestrijding, he says:

Some first steps toward the re-introduction of colourful and creative men's clothing, after two centuries dominated by black, grey, boring mass clothing. That is what Saaibestrijding is about. Often in cooperation with creative designers, makers, photographers and other enthusiastic people I try to trace new paths in male clothing. I am not a fashion designer. Not at all. My mother considered it necessary for her son that he learned how to use a sewing machine, but it was the central theme of my artwork that made me curious about, for example, the question why millions of western men are wearing day after day a tie around their neck. An extremely weird habit if you think further about it.

The Saaibestrijding project wants to inspire, to encourage everybody to leave the rude dictatorship of the fashion industry and its commercial power behind.

The trousers shown today are from Paul's post "Zeven-en-veertig" (19 November 2009) Wayback. They were made specially for Paul by Vaisto Design of Finland. The waistband is unusual. A rough measurement suggests it's eight to nine inches high; in fact, it comes up as far as the bottom of the sleeves on Paul's short-sleeved shirt. It's laced on each side with two interlocking zigzags of cord, and bicoloured, decorated in front with broad chevrons.

I don't know whether it's the fault of my terminal, but Paul's photos look quite dark, and I find it hard to see the different regions of colour. There used to be another photo in Vaisto's catalogue, which I remember as showing the patterning more clearly, but I think that's gone. So below are copies of the photos which I've lightened and made the colours more distinct in. 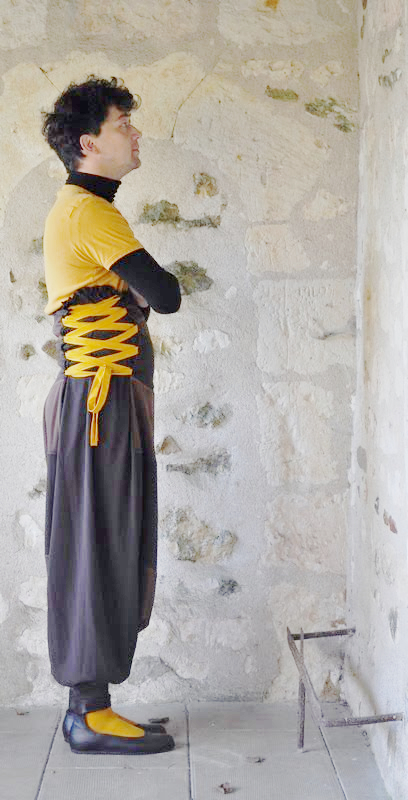 Also in Paul's post is a rather elegant stylised drawing of the trousers seen from the front. This clearly shows the high waist and lacing, as well as what I now know — from the historical-costume book of my previous post — are called the canions. But again, I don't see the colours as very distinct, so I've tweaked that too. The version below now has very inaccurate colours, but does reveal the patterning. 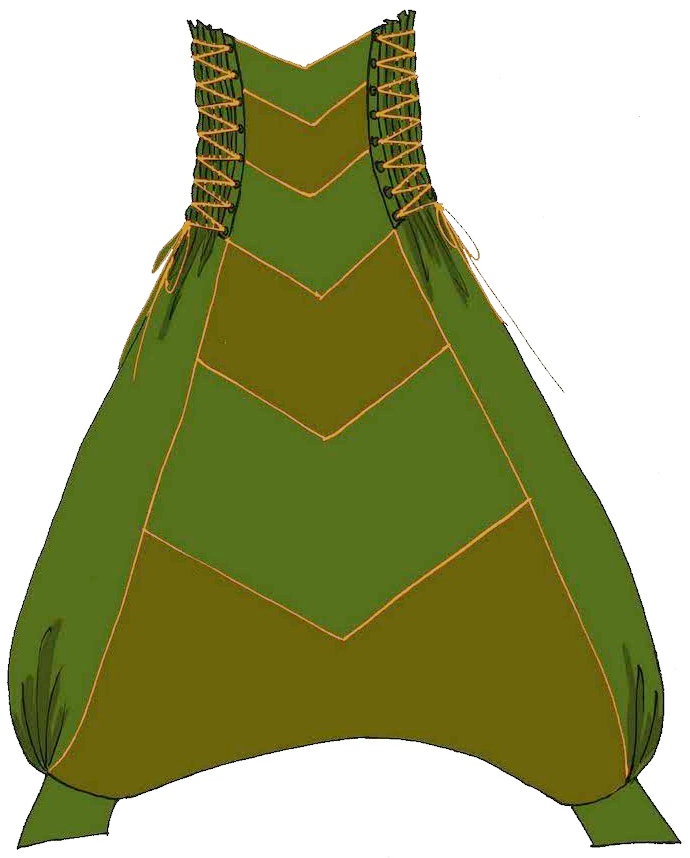