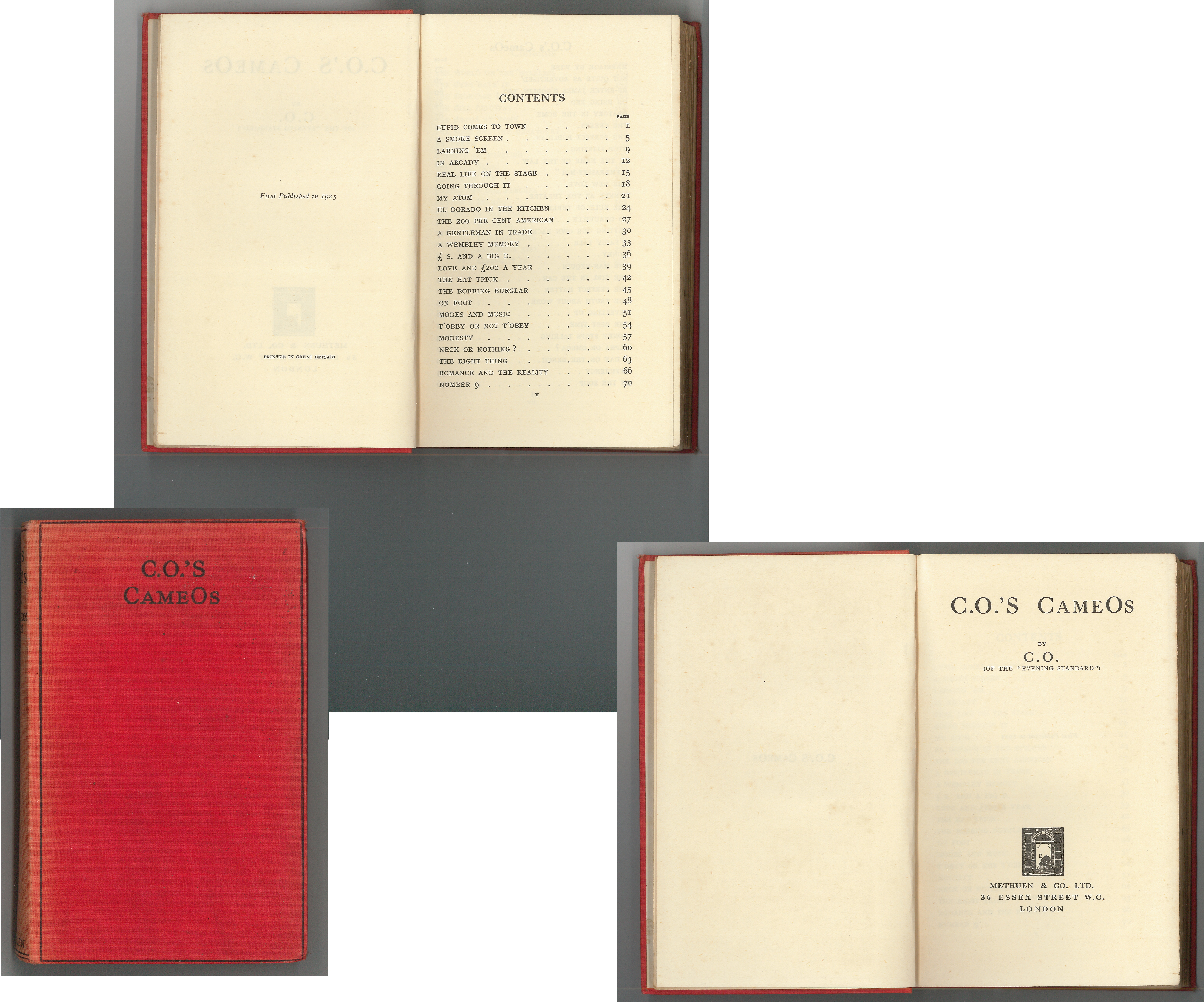 Here's an short piece about men's dress from a book of whimsical essays by "C.O." of the Evening Standard. The book it's in, C.O.'s Cameos, was published in 1925. The essay is called "Neck or Nothing".

A LETTER from an indignant young man with a grievance has drifted to me, and merits attention :

" It is all very well for people to write platitudes that women's dress is so much more healthy than oursâ€”don't we know it ? And wouldn't we give worlds to be able to go to the office in open necks ! You know as well as I do that if I rolled up to the office in comfortable kit the chief would sack me.

" In fairness to the young men of to day who are always being taunted on this point, but are helpless owing to the fact that they must keep their jobs to keep their own women going, will you publish this letter ? "

Right heartily ! Here is where I feel I can come down heavily as a publicist. Let others write about the League of Nations and what the Prime Minister ought to say to the Bey of Algiers. I feel I have a lance to break in favour of the young men who want to show their necks, so that the air may circulate freely, but are prevented from doing so by tyrannical employers.

All this has been brought up because of a weighty report from the Ministry of Health, which records an immense improvement in the health of women and girls as a result of their sensible dress. But men can go on dying in tight collars and nobody cares.

It is merely another example of the way in which the women get the best of both worlds. Not only do they steal our jobs, but they come to the office clad in a fashion which if it is not a delusion is certainly a snare.

Suppose some brave man in the City decided that the pursuit of health was paramount, and turned up at the office showing all those rounded contours which make Miss Tictac of the same office so beautiful to look upon !

Think of the cold and cutting stare of his hierarchial chief.

" Mr. Bloggs, are you so proud of your Adam's apple that you must flaunt it in my face ? When I wish to see the masculine form in all its beauty I will go to the British Museum and look at the Elgin Marbles. In the meantime will you return instantly to your distant suburb and put some clothes on ? "

" But, sir, Miss Tictac is attired like this, and is all the healthier for it. I am sure it makes for efficiency."

" Mr. Blogg, the dictates of female fashion are no concern of mine. It is true that there are days when I am not quite sure whether Miss Tictac is dressed or merely pretending. But so long as she can type my letters satisfactorily, I am indifferent whether she wears a crinoline or a bathing-gown. They look alike to me.

" As for yourself, I offer you the choice between respectability and continued employment, or semi-nudity and instant dismissal. I would advise you to take a taxi and go away and cover up your shame."

And, of course, a little later :

" How clever of you. Â Ah me ! why cannot men dress like that ? " Â And when Miss Tictac departs the Chief is left wondering how old he is.

There is the unfairness of the whole thing. Miss Tictac shows her little neck, and all is well. Mr. Bloggs shows his, and gets it there.

I don't think there is anything to be done about it. It is just part of the general handicap of being a man. Even Apollo nowadays would have to stay indoors if he lost his collar stud.