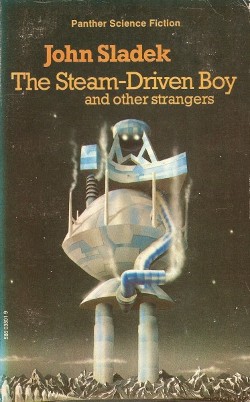 Here, set in a universe slightly askew from our own, is an extract from a story about an inventor who travels from 1878 in order to escape the town bully and seek his fortune in the future. Some things, he realises, don't change — and given the age of the essay I blogged yesterday, it's apposite to note that one of them is men's clothing. The story is John Sladek's "1937 A.D.!", published in his collection The Steam-Driven Boy, all of which is worth reading. It includes some wicked parodies of Asimov, Heinlein, and other writers.

In a moment he had made his decision. He would go into tomorrow! He would see 1937 A.D., that promised land — the very system of numbering our years promised it! He would drink in its wonders: flying machines, the bridge across the English Channel, immortality through mesmerism, electric cannon, a world at peace, where the sun never set on the flag of the United States of Columbia!

'Are you gonna stand gawking at that pitcher or are you gonna wash my wheel?' demanded Morbes.

'Neither. You may take yourself off my property at once,' replied Emil. Raising his clenched fists, he added, 'Go to Maud Peed. And tell her — tell her —'

His hands dropped to his sides, and as his head bowed, the unruly lock of hair fell over his eyes. He looked not unlike the young Abner Lincoln, thought Morbes idly.

— tell her,' Emil said quietly, 'that the best man has won. I wish you both a — haha — a happy future!' With a strangled sob he turned away.

Morbes was so startled by this outburst that he was unable to summon a bluster to his lips. He turned and walked out.

Emil knew he had done the right thing. Without another regret, he filled his pockets with his Mom's homebaked cookies, took a last sip of lemonade, and began to pedal the great generator that powered his engine. He had mounted a special clock face on the handlebars before him, and when its hands reached 1937, he depressed the telegraph key. 'Now it is

The room had not changed considerably, though it seemed to have become some sort of museum. Emil found himself surrounded by velvet ropes.

'Here, get off there!' said a man in uniform. He seized Emil's arm and dragged him away from the time engine. 'You're not to touch the exhibits, understand?'

Before the bewildered inventor could explain, he found himself outside the shop, looking up at a brass plaque which read, 'The Emil Hart Historical Museum'. He was historical!

Pausing only a moment to marvel at his fame, Emil strode toward the main street of town, eager to see the changes time had wrought. The streets, he noticed, had a new hard surface, and there was not a trace of manure upon it!

Then he saw them, lined up at the sidewalk. Great trackless locomotives, just as he had imagined them. As he watched, two men emerged from a store and entered one of them. Through its window he could see one man shovelling coal into the boiler while the other turned valves. In a moment, the great, chuffing engine moved off down the street.

His momentary elation dissipated at once, when Emil turned to look at the shops. There was not a single new building on Main Street, and though many had installed large plate glass windows, the facades above them were faded, dirty and abused. Delmonico's Dining Room had become the Eateria, but Carlson's Peafowl Feed Store had not even changed its sign. Emil examined the contents of a clothing store window, his gorge rising at their dull familiarity. Why weren't people attired in seminude costumes of gold, with scarlet capes? The mannikins showed only women in the same silly hats and long gowns, men in dark, dull suits. Worse, the one or two pedestrians he glimpsed wore overalls of the same cut and hue as his own.

He was thoroughly depressed by the time he reached the end of the town's single street and the Public Library. Despairing of seeing any more wonderful inventions like the trackless locomotive, Emil made his way into the familiar building to the tiny room marked 'Science and Technology'. Here at last he might find respite from the past. Here he might find the future that seemed to have overlooked his town.