The Buttons on the Other Side
Saturday 7th July, 2018
Attitudes, Buttons, Grayson Perry 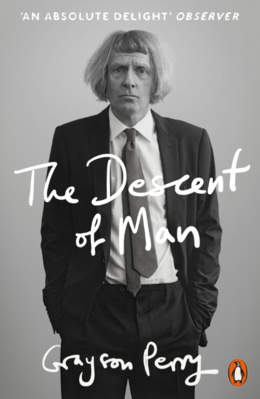 I don't know exactly when C.O. wrote "Neck or Nothing", but it must have been 1925 or earlier. Ninety years later, and attitudes are much the same. Here's an extract from Grayson Perry's book The Descent of Man, in which he tells how he ruined a jacket his mother gave him, because he didn't want it to be seen to be a woman's.

Watching a men'‚¬ā„¢s haute couture fashion show, one might easily be fooled into thinking that next season, all blokes will be wearing calf-length floral culottes and a neon string vest under oversized silver foil parkas. But go to the high street and whatĆ¢ā‚¬ā„¢s on offer will be a tiny shift in what was available last season, maybe with some slight nod to emerging trends, a "daring" colour or change in width of lapel or trouser leg. Most of the time the racks are a sea of black, grey, navy and khaki. Men are becoming more clothes-conscious, but few stray out of the territory of well-established masculine classics. To wear anything not approved by the Department of Masculinity is to bump into that gay electric fence.

During my later years at school, I was the proud owner of a camouflage army-issue combat jacket, which I teamed with a skinhead haircut. When I came home with my surprise crop, my mother said I looked like I had lice, which was nice. I think I adopted this very masculine uniform as a counterpoint to my rebellious sexuality that wanted flowery frills, heels and make-up. Perhaps I sensed one of the attractive qualities of uniforms — that they imply a public role rather than an individual private identity. They distract from the individual body as object, and I certainly wanted distraction from my body as a teenager. After the camo came a donkey jacket, the tough workmanĆ¢ā‚¬ā„¢s garment with leather shoulder patches, teamed with 18-hole Dr Marten boots. I was protecting my softie self with the hooligan armour of the mid-Seventies. When I bought my first motorcycle, my mother gave me her old sheepskin jacket to wear while I rode it. I ruined the jacket by attempting to swap the buttons and buttonholes over, so paranoid was I of being seen wearing a woman'‚¬ā„¢s jacket.